Listen to what suits you 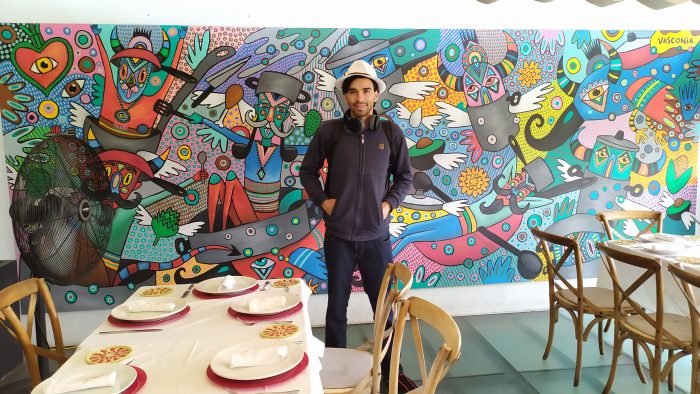 THE FIGHTER FROM ‘LISTEN TO WHAT SUITS YOU’ PLANET

MARIA: Hey Sey! Some people are afraid of Alien Invasion, but actually they should be afraid of Hard of Hearing Invasion, because we're everywhere, no matter whether in Europe or in Bolivia! Can you introduce yourself to the rest of our beautiful world?

SEY RODRIGUEZ: Earth Greetings. My name is Sergio but my friends call me Sey, I come in peace, I come from the planet "Listen to what suits you", from the city of La Paz, Bolivia. I study Social Communication and pursue a master's degree in Journalism. I don’t yet have my thesis defense date. Besides that, I identify as a frank, open, cheerful, fun, but also reflective, critical person who is aware that if we don't stand up for ourselves, everything will remain the same and we have lots of things to improve. I am very active, I really like to share, I like technology, and I am very visual. If I have an opportunity to do more than we are allowed, I would go for it without doubt. I believe that knowing our rights opens more doors. I overcame many fears and the best route was to defend others instead of being the one being defended.

I was one of the founders of the HOH Association in my city, there were very few of HoHs at the time, but it was great back then. After an exhausting journey, I took a deep breath and withdrew. The Deaf community also invited me to participate but knowing sign language was a priority for them, and the two groups got divided. Some Deaf people even excluded us just for not using Sign Language, which had been prevalent in the Deaf communities of Latin America. Currently I am more active as the first representative and pioneer of a new group of university students with disabilities. It is a challenge that involves many careers and many disabilities, but it is also a pleasure to know that we are on the right track.

MARIA: Welcome in peace, the fighter from 'Listen to what suits you' planet! Are you hungry or thirsty? If not, then sit among us by our campfire and lead us deeper into your story... How did your journey start?

SEY: An unknown cause contracted in an adult age took away almost all my hearing in some frequencies, but I can hear in certain places as if I didn’t have hearing loss. I sought a couple of donated hearing aids without calibrating but with solar power chargers. Unfortunately in my case sound hurt me, it made me more sensitive, eventually improving because I was covering my ears but outdoors I had to keep up with the noise.

MARIA: How did you career start?

SEY: My thesis research initially focused on discriminatory journalistic, such as Page Siete and La Razón, with "capacitism" being a form of discrimination (what is known as "Audism" for hearing impairment.) However, I wanted to educate the population, so I switched to "Directed Work", half theory and half practice. Miraculously, the tutor lives almost on my street, and he is the only teacher of workshops that create audiovisual production with students and their own teams. A segment of a TV program focused on the life stories of people with disabilities in the City of La Paz, Bolivia, a land full of barriers. We worked on issues, interviewed, recorded at the events, made interventions. We also plan to use social networks, to coordinate with the students of the TV workshop and to produce interviews as their schedules permit.

MARIA: Why did you choose these studies?

SEY: Social communication is coordinated like an orchestra and is present in so many areas. In fact, communication means active listening, this is something that few really apply yet it should really be valued. I am certain that one should focus on what fulfills their life, happiness is doing what you really like, and if you create an impact on society, even better.

A major issue in the community of hearing impaired is language. It is difficult even for those who speak English or Spanish. Bolivia with its mostly indigenous population is a challenge as such. We must change society and ethics to face fake news that spread harmful ideas. You have to have a lot of courage to request to change a classroom for one person. Basically we must fight so people stop sitting in the back and move forward to the front row and put their attitude towards discrimination. I chose life stories as a part of my background research. With media, we can be the voice of those who have never been heard or seen by a society that left them to their fate. The school of life teaches us much more than it can teach others.

My head told me to study something simple instead of getting into something that "I am not able to do", but I am one of those people who do not sit at a desk all day, so to speak. I am a traveler to the unknown, my heart whispered that it did not matter that I do not hear well, communication is much more than just oral communication. Paradoxically, those who see do not observe; those who hear do not listen (or bother to answer a message.) Those who think well, only think of themselves, are trapped in their own world and do not see beyond their nose… I am always the black sheep, the one who asks questions and stirs the class, the one who does not conform to what they say, the one who sees sources not only as valuable data, but as important stories and friendships.

SEY: Schools must teach Braille, literacy and sign language, also project speech transcribed to text on the walls. It may seem ambitious, but with strong will you can do everything. If we compare HOH and deaf people in the context of Latin America, HOHs have access to civil life despite communicative barriers, while deaf people who do not develop language skills are excluded. There are micro HOH communities but they are generally invisible and isolated. Internal and external contradictions prevent us from going far, sometimes through political barriers that force you to serve in the military before going into politics. Few of us advocate in the region, sometimes it is quicker to do it alone, further from the team. 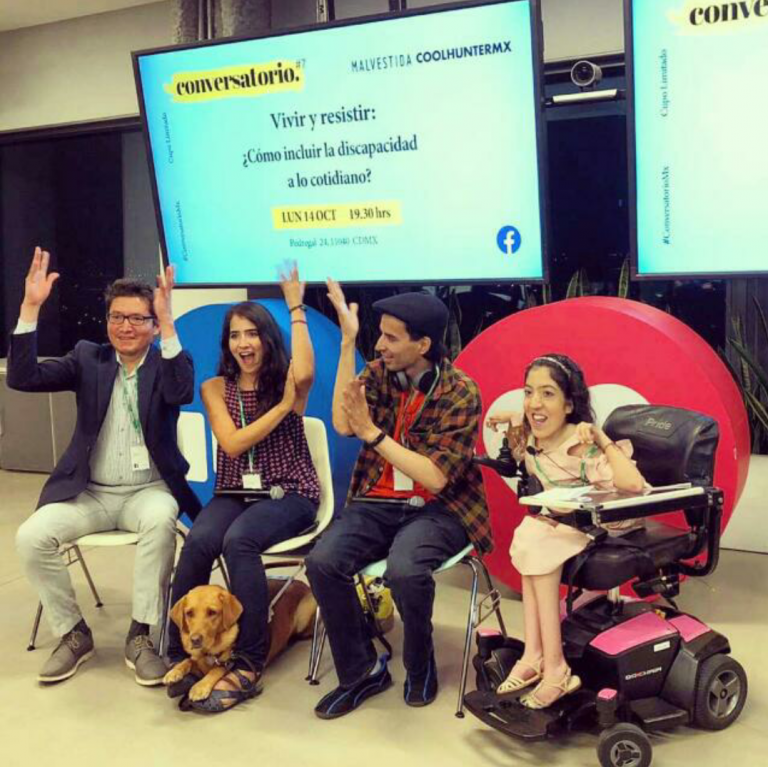 MARIA: What kind of activities are you trying in order to improve inclusion?

SEY: My career is divided into three fields, TV, radio and press. Among student population, few are interested in reading, our libraries are getting empty, and there is no accessible library to be implemented anytime soon. 70% of the students go to TV, they will not be able to do audiovisual production but will appear in some program without getting a real sense of the TV. Sad thing is that with a TV studio in the University we are not exploiting the potential of content that benefits us as a minority population.

I think that after the rise of social networks we could use both media to raise awareness. Nobody believes that I have hearing loss, they believe that I am being supportive when I am making visible something that few want to see.

We have worked on disability-related events, interviews and interventions to capture reality in the audiovisual format. It is a great challenge because it depends on a whole team and I am the mind behind the project. We exert certain levels of incidence in a fairly conservative structure such as Latin American higher education, where little is known of innumerable disadvantages that we encounter once we enter the University. We are also a family that supports each other and shares difficult and valuable moments.

We work with the United Nations Commissioner for Human Rights on a series of policies that we must implement in the University and in higher education in general. On December 3, International Day of the person with disabilities, we organized Inclusive Higher Education Network. We work on getting our own space within the university, an accessible library, we held brainstorm workshops, fought authorities and third parties, even people with disabilities who attack each other. In short, all this is just a fraction of efforts.

I have a great responsibility now, this allowed me to represent my University and my country in an International Pro Management Congress yectos in Mexico. It was a great opportunity obtain hearing aids at lower cost, to network with community of people with disabilities and participate in their events.

MARIA: What would you like to change if you could do that?

SEY: I live in a poor country, poor by the uncultivated minds of our children. There is no future if there is no dignified, inclusive education that includes life stories of people with disabilities, stories not taught in a traditional classroom. It must be a mandatory subject in addition to braille, emotional intelligence and sign language. New technologies, available to everyone, should be focused on challenges, this way we can build our own accessibility. I would have loved to have meetings just as European HOHs do, here in America inequalities of our society make it very complex.

But most importantly, do not forget that many people are sacrificed to get a bonus of a quarter of minimum wage. A law that guarantees their rights is rarely enforced. We came up with a Citizen Law Initiative that should be ratified by Parliament, and this is how we managed to abolish forced interdiction. To get traction, the incidence and contacts in social networks are necessary. This is showing positive effect, officials are taught Sign Language, but there’s much more to do and this is very exciting. We can be an example and follow other examples. In Mexico City I contacted a deputy chairman of the commission of Human Rights to expand the initiative of the Parliament of Persons with Disabilities to different Latin American countries. It will be something very ambitious, like the Ministry of Disabilities in Holland, a huge step forward. Changing one thing would generate neither inclusion nor awareness. Educating people about things they often are not aware of would be most effective support.

MARIA: And those words are best to describe our future target: to teach people to help both of those worlds in communication between us. Thank you, brave fighter, may your little step of one man become a huge step for the whole Bolivia!

Sey’s annexes:
1. Here you can see some scenes of how Sey’s city and University works! It’s a story of Richard, a blind person with a guide dog, who came from Spain. He wrote a book about disability in Bolivia: https://www.arte.tv/es/videos/080538-000-A/dejadme-amar/ - documentary movie available with English subtitles.
2. Seventh edition of the Conversation organized by Coolhuntermx and Malvestida, where Sey took part: “Live and resist: how to include disability in everyday life?":
Video: https://www.youtube.com/watch?v=_4W8q9hbE7s
Article: https://malvestida.com/2019/10/discapacidad-e-inclusion-conversatorio-malvesti` da-coolhuntermx/
3. Wanna read more about HoH identities? Check Sey’s blog: https://escuchasloqueteconviene.wordpress.com/ 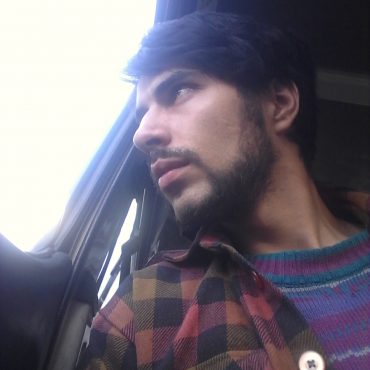