How I became a vet? 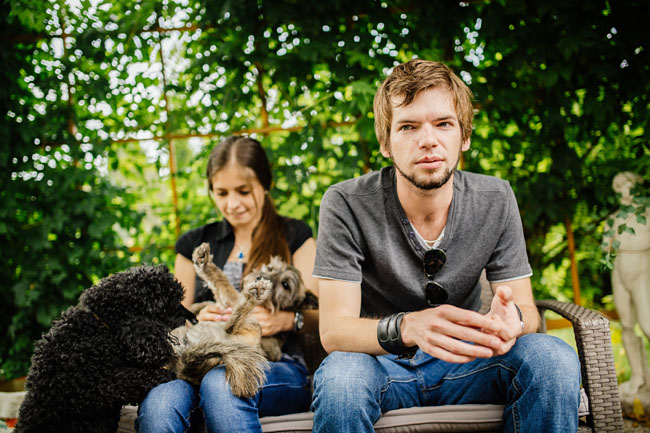 My name is Dr Levente Mikesy, I am 29 and I have a sister and a brother. My mother can hear well, and though my father is seriously hard of hearing, nobody would ever have thought it can be inherited. It was a surprise that out of three children two inherited this, my sister and I, and the level of deafness in both of us is similar to that of our father’s. According to doctors, this type of hearing defect is on the border of total deafness and being seriously hard of hearing: what we have is only remains of hearing (85-90 dB on 60 Hz, 95 dB on 125 Hz, 115 dB on 250 Hz, 120 dB on 500 Hz, 135 dB on 1000 Hz, and immeasurable above 1000 Hz, on both ears).

My mother is a speech therapist, so fortunately we had a specialist help from early childhood, and we got our first, extremely powerful analogue hearing device at the age of one and a half. We learnt to speak and have lived among hearing children from the time of nursery school, as our parents were convinced that we had to do our best to fit into normal society.

One thing is certain: to live among people who had probably never met any hearing impaired people before, was very stressful. This was and still is the greatest disadvantage of this lifestyle. I was always doing well at school, my teachers were more or less helpful, but in the majority of cases – due to the inexperienced people around me – I could only count on myself: all that I could not perceive in class, I had to investigate and learn from books. It is hard to estimate, but today I think I can understand 20-60% of the words said in verbal communication, the rest was always there for me to guess from logics. It is like a puzzle game. What is more, as you do not have time to think in verbal communication, over the decades I have been forced to play this logics game in my head really fast. This skill had implemented two major benefits later: in learning foreign languages and during university years.

I had always wanted to become a vet, from the age of five, because I love animals. The idea of being able to help them when I grow up, however sick or injured they are, made me happy. However, the environment I lived in made me insecure. There was nobody but me who believed I could make my dream come true. No, because these studies require high-level, professional communication, which I was short of, and no, because there was the question: how will this man use a stethoscope? The answer to this question was still unclear for me at that time.

I asked a professor at the veterinary university about my plan and his answer was that it was out of the question, as this profession was too dangerous for me. What if I do not hear someone shouting: Watch out, the horse is going to kick you! Or if I do not hear a dog’s warning growling?

Everyone wanted to dissuade me from my plans, yet I handed in my application. And though I was not accepted first, the following year, having already two language exam passes (Latin and English) and being much more enpowered with knowledge, I finally succeeded.

So far so good, but thus I only got the chance to get my degree, and I had to face the fact that my chances were little. I found myself among dozens of people, many Hungarians and even more foreign students. I was used to having at most ten teachers at a time whose way of speaking I was familiar with. Now, I had different teachers for different subjects who changed every semester. I could see on my mates’ and my professors’ faces that they were surprised by my presence, as having a handicapped student at this university was practically unknown before. In spite of this, many of them tried to help me as much as they could and I am really grateful to them.

From the first years I had to learn to cope with the failures I had to face only because I could comprehend much less information than my mates. I managed to use at the exams what I could learn from books and professional literature, but many professors wanted to hear their own words from lectures. At such times the oral exam seemed to be a fight for life. I do not even want to count how many such hours I had to survive. I had difficult times when I could not hear the examiner’s words and I could do nothing when they accused me, after asking the same question over and over again, of simply wanting to gain some time. There were a few professors, who, without even asking anything, made me fail by saying they did not want me to become a vet as a hearing impaired, because they thought I would harm the profession’s reputation. What could I have done in such situations? If I raise my voice against such treatment, I could get in bigger trouble… So I put aside my pride and went back to them as many times as I had to and, in the end I convinced them that I deserved a pass.

The most difficult were the preclinical subjects of the first 3 years for me, but I tried to survive by keeping in mind that the internal medicine starting from year four would be the one which will finally decide whether I was suitable to become a vet or not. I was really scared of this subject and I had no idea how I will cope with the stethoscope problem. After searching for long, I found the solution with the Hearing Impaired E-Scope model of Cardionics Company, and the obstacle was removed.

While studying internal medicine, I had the greatest surprise. Animals cannot tell you what their problem is, where they hurt or what they had eaten before. Vets should guess the diagnosis by asking questions from their owners and by observing the symptoms, mostly from very little information. And it was at this point that I made enormous advantage of the routine I gained in verbal communication over the decades: I understood some of each sentence, the rest I had to deduce myself. With sick animals I also had some information and data, success needed plus knowledge, ingenuity and logics. I was doing really well here, as I felt comfortable in the world of incomplete information. This ability drew my professors’ attention and it was at this point that I finally convinced them that I could become a good vet indeed.

From then on everything went smoothly. One thing remained unchanged: stress. When I was in my second year, after long months of studying and many failures, I managed to pass the anatomy examination, however, the day after the exam I felt extreme pain in my chest and I fainted. I was told in the cardiology ward that I had stress-based fibrillation. Fortunately, since then I have had no such experience but I know I have to accomplish twice as much as my hearing fellows to find my place in society and three times as much as my colleagues to be a successful vet.

So, what did it feel to get the so much desired degree?

Strange. Weird, as I cannot still believe how lucky I am to be able to work as a vet.

I have experienced several times how concerned the owners become when their pets get in trouble and I kept asking myself what it felt like when you experience this as a hearing impaired? When my peers take their pets to the vet they are in a very difficult situation. They face communication problems, as many of them can only use sign language, while the vet can only explain the pet’s problem and the treatment verbally. They leave the surgery with a bitter feeling, as they do not know what they have to do for their pets to recover, nor are they aware of the chances of survival when their pet has a serious illness.

After graduating from university I went through many adventures, living terrible and happy moments, whose main characters were thousands of abandoned, tortured and abused animals. I saved numerous animals from certain death. The warning I got from that teacher was not unfounded. Every single examination and treatment puts me into the risk of not hearing a dog’s growling or a painful neigh of a horse. I try to take care of myself and I hope I will be fortunate in the future as well. However, I am fully compensated by the sight of my recovered patients who happily purr or wag their tails.